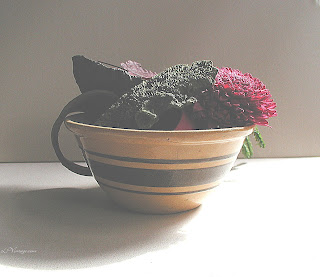 After Allison of BrocanteHome posted some photos of Holly Farrell's paintings, I've been wanting to see if I could capture a bit of the beauty and simplicity of everyday objects the way Holly does through her paintings. This morning I had some fun pulling out a few of my old cookbooks, photographing them, then playing around with my photo editor in an attempt to capture something of the feeling of Holly's work. In the end, I've decided it really doesn't matter if I did or not because I like the photos as they are. I just love the vintage wallpaper cover on the top cookbook. 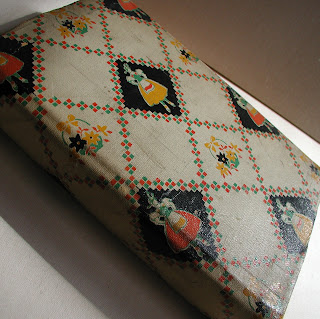 Look at the neat oilcloth cover on this one - it's an early edition of the Fanny Merritt Farmer cookbook. 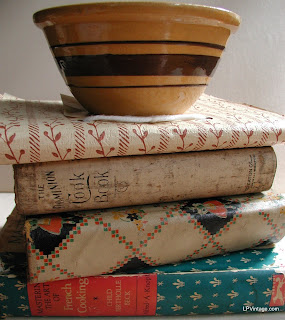 I like the vintage wallpaper cover on the top cookbook. 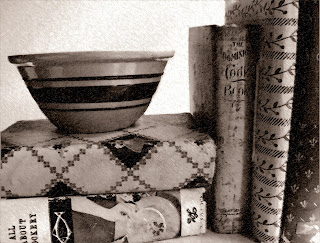 One of the things I like doing is making sepia tones in my photo editor. 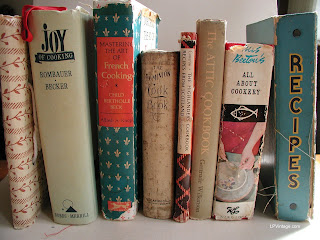 I think this is my favourite composition, so far. That was a fun exercise. Next, I've got buttons and sewing things on my to-do list.
Posted by LP Vintage at 2:52 PM

Hi Lorraine, I love the first pic with the yellow ware bowl...I have a thing for old bowls I realize! Have to haul mine out and take some cool vignette shots like that!

Hi Kelly! Glad you like the bowl pic. Let me see your pics when you do them.

Hey, did you notice The Art of French Cooking book - that's the one I got from you! Lorraine.

Your blog has so many wonderful things and inspiring pictures. Thank you for sharing! Makes me itch to go to the flea market.

Thank you Matroskin for the kind comment! I peeked at your blog and enjoyed my visit! I'm itching to go to a flea market too - can't wait for the outdoor ones to start up here!

Alison of Brocante Home just posted some of my pictures on her blog - thank you Alison!

I am so excited and thrilled that she liked them enough to do that!!

A big WELCOME to all who visit from her link - please let me know you dropped by!

I arrived at your lovely spot via Allison's Brocante link...I'm so glad I stopped by! Your vignettes are the sweetest things....I too have hopped on the 'longing for the flea market' bandwagon!

Andie, thank you for your very welcome compliments! I'm glad you came by.

I am so psyched for Yard Sales and Antiques this weekend! Tomorrow, I'm off to an out-of-town antique show plus a visit to my favourite Prim decorating store. Hope I remember to take my camera so I can post some pics.

Linked over from Brocante Home. Beautiful pictures! We're also hitting some sales tomorrow. Neighborhood sales - yay!! I'm new to blogging so I'd love your input if you wouldn't mind paying a visit (lovelyblessings.livejournal.com) Have a blessed weekend! -Polly

Lovely photos! I'm dropping by via Brocante; I'll be looking around your blog some more!

LP Vintage
Welcome to my blog mostly about my travels, flea market finds and collections.